Casa Vicens, Gaudí residence in Barcelona – It is now open to the public 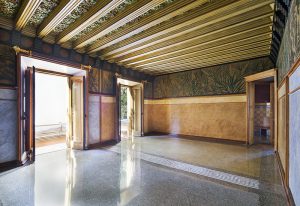 People expectation for this architectural masterpiece was finally able to be satisfied. The arduous restoration concluded and its fresh phase as a museum was inaugurated in November 2017. It means that in your next trip to Barcelona you should visit Casa Vicens and delight in its beauty and attractiveness. Doors are open daily to allow you to enter and enjoy its splendor.

Giving you a short historical tour we can tell you the spot was built in 1883 by Antonio Gaudí. He is properly considered as the greatest performer of the architectural modernism in Spain. It was his first work and to recognize its magnificence, along with six more highlighted constructions, it was declared in 2005 as a World Heritage by UNESCO organization.

It was the alternative summer dwelling of a wealthy man called Manuel Vicens I Montaner. Gaudí recently had finished his career at the university and with this work he proved being ready to leave a legacy to the world. A feature that stands out over others is the fact that he designed personally every decorative component installed on the building.

Casa Vicens, Gaudí residence in Barcelona style is characterized by the Middle East fashion that prefers the straight lines against the curves ones. The Arabic, Persian and Byzantine art mark the ornaments used. One example of this is the facade decoration which exhibits a profuse amount of beautiful and varied tiles. The dining room was the area receiving the major emphasis to be returned to its original glory.

When visitors are inside feel like being in a fairy tale and all the information provided at the entrance allows people to go deep in the epoch thoughts and understand each detail included in the tour. You will see some original furniture and a big collection of almost 30 famed paintings by Francesc Torrescassana. Many other interesting things you will discover progressively during your time in Casa Vicens.

Package holidays to South America: some reasons to travel through the region

Verse app to pay friends: another valuable instrument in the modern age